Ecoride is swedens biggest ebike brand and they have almost an 20% market share. Especially in Stockholm, Malmoe and Gothenburg where they have Flagship stores. They all have had very similar silverfish batteries on almost all bike since 2008 and they have existed in at least 10-2o different version and variations. 2 manufactures: King & Co and AE Battery. At least 3 different case hights. 2 Colors. And more then 5 different BMS.

In 2016 they have had enough with the problems from the chinease lipo manufactureres and switched to brand 18650s with a slight updated case. This is what we refer to as Ecoride 2016 batterypack.

The case is only in black this time. Compatible with older models and with and updated handlebar.

They changed the XLR (good choice) to DC (bad choice! Not meant for changing) but that’s their problem. Case is 36 cm and the tallest one so far!

This is the only visible difference on the outside. No on/off keyswitch. Nice logo on the top and an indicator under the handle bar.

The bottom is identical to older models and is as always worn and torn. In image two you can see 2 screws missing. Fell off by them selves according to the user… Or where they ever present?

Label on the top. Here the lies begin. This battery does NOT have panasonic cells! They have 3 versions:

The 11ah version is the basic one and comes with all new Ecoride and 99% of all batteries are this version! The Sanyo UR series was developed by Sanyo even before Panasonic bought them and has nothing to with Panasonic! It dates back to at least 2008. The 14.5Ah version is using panasonic cells but then again the 17.5ah is NOT panasonic! They are Sanyo cells! They are good cells but they are Sanyo! The only reason to lie like this is that Panasonic is a more reputable brand. We talked to Ecoride about this and they have not even bothered to ever opened any of the batteries!!! I asked them to check and the said the cells “look red”. Argh!!

But why does it matter?
Ever heard of cars like Bugatti, Lamborghini or Porsche? Well they are well know brands of luxury cars but they are owned by wolkswagen. What if wolkswagen started calling their cars Bugatti, Lamborghini or Porsche? This is the same problem! Just because another manufacturer has invested in a competing company and has a majority ownership DOES NOT make the same brand!

The bottom part looks similar but they put the fuse in the bottom. But 30A? 15A are recommended for 250W systems so they dont protect much.  Also you can see the interior of the battery which is a “black hole”. There is 10 cm of padding to fill out the empty case…

Here is some sloppy work.

You can see that the case includes cylindrical cells but its not slim. Its not adjusted to the case. It does not sit well….. And they added padding in the bottom and silicon to the top to hold the pack in place! That should not have not been necessary if they had a good basic design. Its like putting pancakes in a toaster. Its not a good fit! 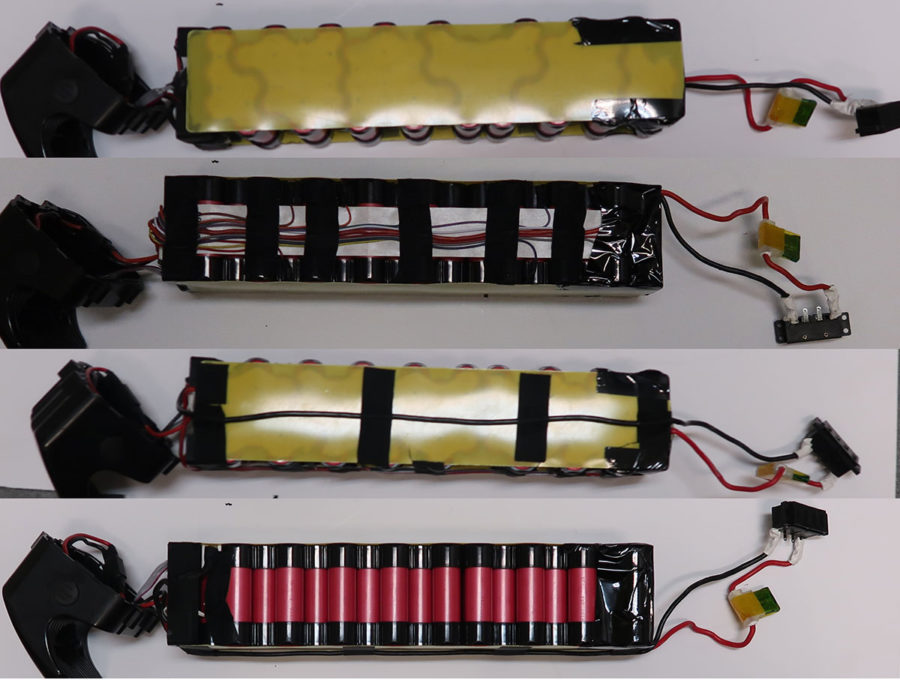 The 4 sides inside the battery. The config is confusing and they had to create several custom cut nickel plates. The yellow plastic does not cover the hole sides so they are pretty worthless. Looks more like a DIY battery.

The problem with this battery is that the customer complained about poor capacity after 15 months of use. We will test the capacity and add to this story later…

Update:
The battery was 10.49Ah out of 11ah nominal as new. The problem is most likely the temperature which is about 0C outside or below. Also The Sanyo Ur chemistry is an very old lithium mix and has a significant lower voltage then  modern cells and this might add to the problem, especially the indicator on the ebike might be a step lower then normal.