NCR18650G is finally back on the market! It was rumored to be a 3600mah cell but it dissapeared fast and rumour is that Tesla bought every single cell! Now they have their own production and NCR18650G is back for consumers! Panasonic have produced NCR18650GA in two of their Sanyo plants but they are rated at 3350mah and are tested at about 3401-3633 in my previous test. According to the datasheet however its rated at 3300mah with a typical capacity at 3450mah and that is actually what it really is.

I only bought 5 cells for testing and the result is:

I think i’ll stickg with the GA for now….. 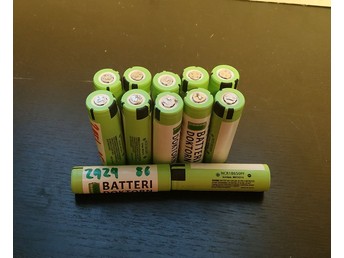 Its not hard to find “used 18650 cells”. Usually you can go any electronics store and ask for used batteries or to where you recycle electronics. Also

Bought 5 NCR18650A for testing. They are more expensive then

THE YEARLY DECAY OF SAMSUNG...

This is not a test but wrather an opservations.

The yearly decay of Panason...